The wind-blown sand from the bed of the glacial aged Maume Flood on the Wabash River over-topping the rich glacial out-wash of the Wea Plains creates a  very rare and varied interface of substrate that supports a diverse group of native plant and animal species.

Located just south and a little west of Granville Bridge in western Tippecanoe County, the property includes a number of plants of special interest including at least two species of puccoon (fringed and hairy), forked bluecurls, and perhaps the densest stand of golden-aster in the state, known to occur in only a few scattered localities in Indiana. Interesting animals seen on the property include the state endangered ornate box-turtle, lark sparrows, yellow breasted chats, orchard orioles, and six-lined racerunners.

The northern end of the property is in the floodplain of the Wabash River and contains a slough and reforested lands, and is home to the rare plains leopard frog. 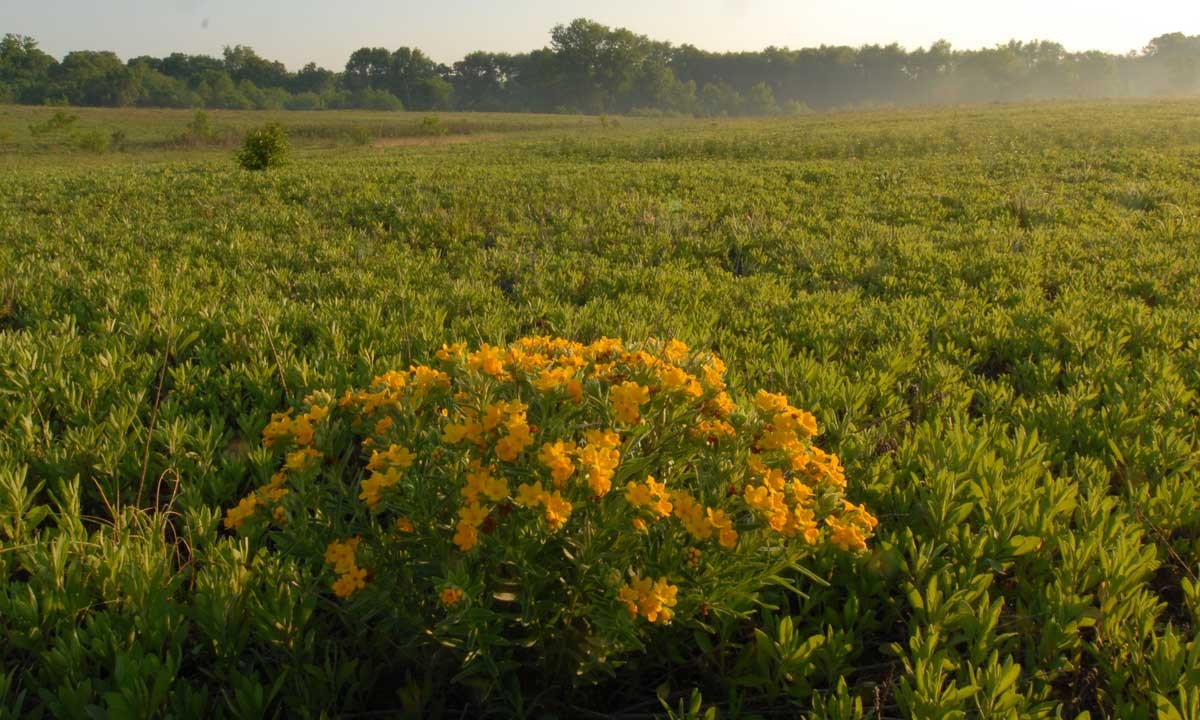 NICHES acquired two 40 acre parcels in 2001 and 2002, with the help of the DNR Indiana Heritage Program, Roy Whistler Foundation and supporters like you!

The sandy soils on the property protect a very rare community type that was laid down at the end of the glaciers during the Maumee Torrent. The site is home to state endangered golden asters, ornate box turtles and threatened fringed puccoon and forked blue curls, as well as a host of other interesting species like six-lined racerunners, sand milkweed and royal catchfly.

The southeast corner of the property was an old field that was restored with prairie plants. All of the species that were drilled into the more gravelly out-wash soils to the east of the barrens proper are being expressed at some level. Leadplant (Amorpha canescens) is present with its frequent companion, purple prairie clover (Dalea purpurea). NICHES introduced a few small patches of prairie willow after finding a record of the plants occurrence in Tippecanoe County by Stanley Coulter (1900). After a controlled burn, spring 2014, prairie grasses, mostly Canada wild-rye and side-oats gramma, exploded with seed. NICHES collected seed, helped by lab students from Purdue’s Botany 110 labs, to distribute into the understory of areas restored to savanna.  The dispersal of locally collected seed sped the development of a graminoid understory, which will help carry prescribed fire through the habitat during future controlled burns. In 2015, royal catch-fly (Silene regia) was reintroduced to Granville Sand Barrens. Royal catch-fly, a state designated rare species, was present in the prairies of the Wea Plains historically. The species was photographed on the edge of Granville Sand Barrens in 2006 by Dave Krohne. The source seed for the reintroduction was collected,with the help of Tom Swinford, Deputy Director of Nature Preserves for the IDNR, from a remnant population east of Attica, Indiana.

From Lafayette/West Lafayette take South River Road, west across US 231for about 6.5 miles until you reach the sign for West Point at 700 W. Take 700 W across the Granville Bridge, then take the first road (75 S which is gravel) to the right. Go about 1.6 miles and watch on your left for a sign in the parking area.