Shawnee Bottoms features over a mile of frontage on the Wabash River. A section of the old Wabash and Erie Canal, later converted to a railroad bed by the Covington branch of the Wabash Railroad, roughly bisects the property from SW to NE, splitting the bottom land and upland portions of the preserve. The railroad line transported holiday-makers from Attica to the area that is now Portland Arch Nature Preserve until abandoned in the early 1930’s. 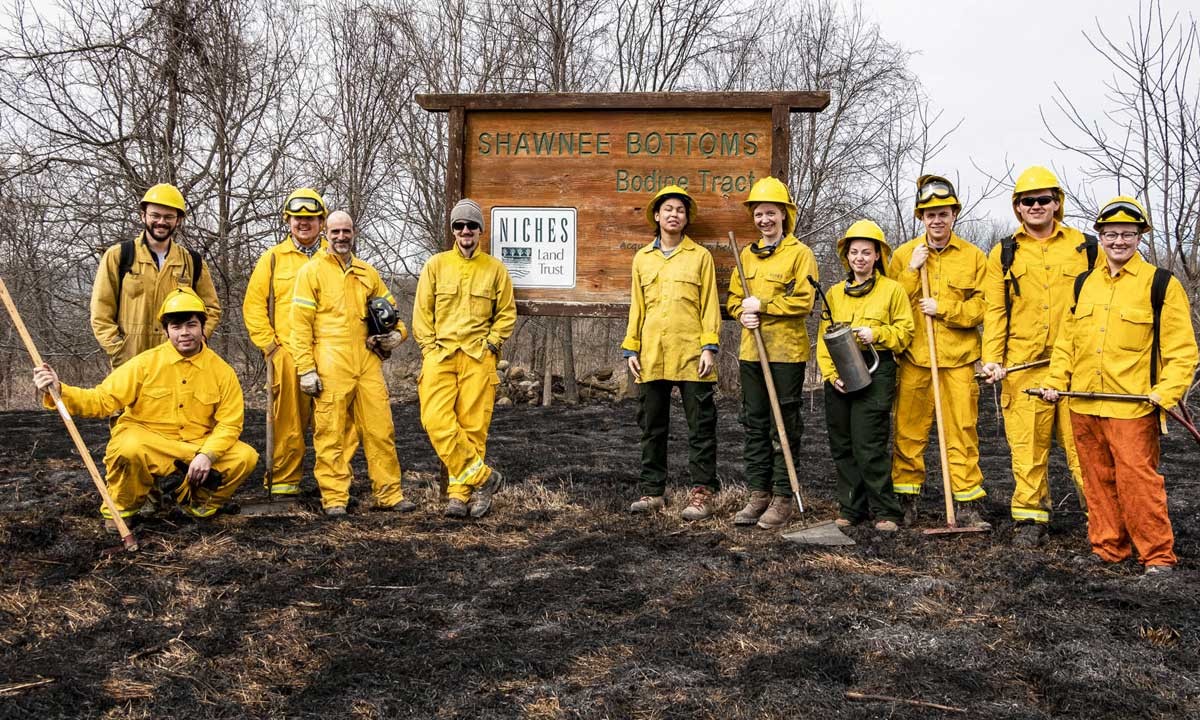 Contributions from the Roy Whistler Foundation, the Alfred J. and Dorothy N. McAllister Foundation, and the EPA mitigation project for an industrial pollution violation helped purchase the original acres of the property in 2002.

In 2009, NICHES added 35 acres with the help of the DNR and USFWS mitigation funds for a transcontinental pipeline.

NICHES expanded with 54 acres in 2014, 23 acres in 2015 and 98 acres in 2017. These purchases were possible with principal support from Indiana Bicentennial Nature Trust, Indiana Heritage Trust, Roy Whistler Foundation and Laura Hare Charitable Trust.

Shawnee Bottoms has, in some ways, outgrown its name since its initial protection in 2002, when 150 of the original 220 acres were still in agricultural production and the majority of the property was in the floodplain, or ‘bottom land’. Today, after three separate purchases of adjoining upland tracts in 2009 (35 acres), 2014 (54 acres), and 2015 (23 acres) Shawnee Bottoms includes 112 acres of upland.

The bottoms boast multiple seep streams, high quality fens, mature riparian woods, restored and naturally regenerating stands of floodplain tree species including American sycamore, eastern cottonwood, black willow, black ash, northern pin oak, and swamp white oak. The western boundary of the preserve consists of one and a half miles of frontage on the Wabash River. A particularly interesting feature of the bottoms, Scott’s Pond, a 20 acre floodplain pond fed by a combination  seep streams flowing through the well-drained out-wash and residuum soils blanketing the adjacent uplands and Wabash River floodwaters. On the river side a wide mangrove-like strip of buttonbush (Cephalanthus occidentalis) and native Hibiscus moscheutos (crimson-eyed rose-mallow) edge Scott’s Pond. The shrub species provide a striking late-summer display of pink and white when viewed from the sandstone bluff above the opposite side of the pond’s northern end.

The higher ground upland of Shawnee offers as much diversity as the low-lying ground. The southern half of the upland consists of 30 acres restored to native grasses, forbs, and white oaks in 2002 and 2003, sections of mature oak woodland, and a large out-wash ravine with a meandering seep stream.  2014 – 2105 welcomed the appearance of a colony of busy beavers that created a multiple-acre impoundment on the high side of the canal towpath/old railroad bed south. Using this man-made structure as a dam the beavers slowed the movement of water through the soil profile and revitalized populations of naturally occurring remnant fen species including Symphyotrichum novae-angliae (New England aster), Pedicularis lanceolata (fen betony), Chelone glabra (white turtlehead), and Carex hystericina (porcupine sedge). The standing water created habitat for wood ducks, turtles and other wildlife and helped increase amphibian breeding. The beavers’ tree thinning will help promote rich diversity of sedges, grasses and forbs abundant along the towpath area and will help foster oak and understory shrub regeneration. The northern half of the uplands feature both wet and dry oak woodland communities shaped by the thin soils and closely associated bedrock geology. Sandstone, which increasingly outcrops through the soil profile to the north, creates extremely dry, well-drained, black and white oak woods with Dodecatheon meadia (shooting stars) and Silene virginica (firepink) heading up a suite of high quality dry site species occurring in close association with swamp white oak dominated flatwoods filled with perched wetlands and a thick herbaceous layer of Cinna arundinacea (common wood reed) and Carex lupulina (hop sedge), adorned in the summer by the blossoms of Ludwigia alternifolia (seedbox) and Lobelia siphilitica (great blue lobelia).

The 77 acres added to Shawnee Bottoms over 2014-15, have not only added high quality acreage to the preserve, including ownership of the entirety of Scott’s Pond, but they have also connected the previously interrupted portions of the former Wabash and Erie canal towpath allowing expanded trail system in celebration of Indiana’s 2016 Bicentennial, including The Laura Hare Trail - a 3.3 mile loop that improves access to some of the most interesting portions of the property.

From the SR 28 and US 41 intersection in Attica Take US 41 south 4.9 miles and turn right onto E 650 N. Next, turn right onto County Road 160 W/N Williamsport Road. From here, the road jogs left for 1/10 of a mile becoming County Road 700 N then jogs back right to become County Road 170 W/N Williamsport Road. In 0.5 miles turn left onto W 750 N/W Covered Bridge Road. *be aware that as of March 2016 no road sign identifies W 750 / Covered Bridge Road at the intersection with N. Williamsport Road.  If you cross to the north side of the Wabash, you have missed the turn. Travel West on W Covered Bridge Road through a curve to the left and a curve back to the right. When you get to the next curve take the short lane into the parking area where you will see the large wooden “Shawnee Bottoms” sign.