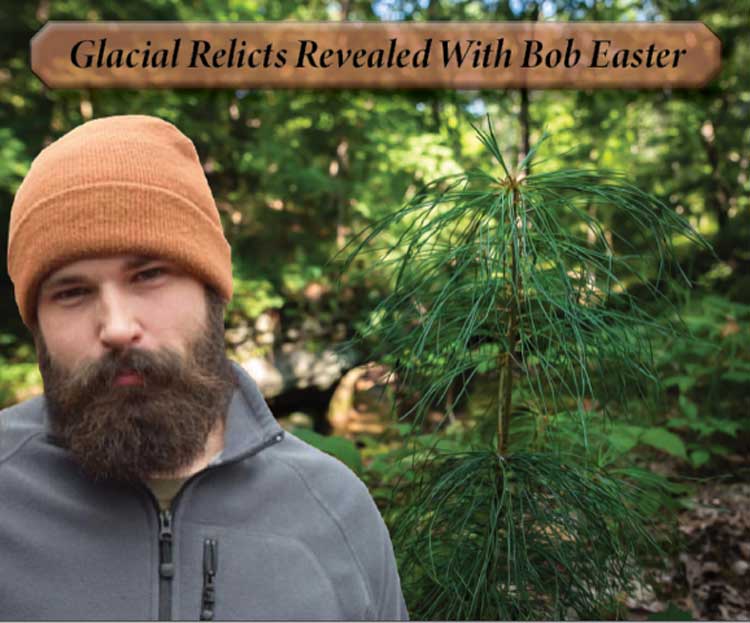 NICHES Stewardship Director, Bob Easter, presented information about the historical presence and importance of native white pines in Warren, Fountain and western Tippecanoe County, and their associated plant communities on a Zoom Video Recording. In addition, he touches on NICHES current efforts to change management of lands to tilt management to allow for the natural regeneration of pines where mature stands/ individuals exist along with restoration efforts to areas historically occupied by white pines using local ecotype pines which have been grown out from seed.

I first learned to positively identify Pinus strobus, the northern white pine, in Sally Weeks’ dendrology course. We had met many times before, the white pine and I, but it was not until this juncture that we were formally introduced. A beautiful tree; tall and strong, yet somehow delicate and forgiving. Looking back at my notes there are lots of descriptive words for the identifying features of the species, but one is circled – Needles – 5 per fascicle. This was the one detail I needed to remember because I had been advised that no other pine that I was ever likely to encounter would share this feature. I knew nothing of the species range, habitat preference, or place in the world. What I knew was how to identify the tree and for the time that was enough, after all, it’s no use putting the cart before the horse.

After completing my dendrology course, probably the most worthwhile credit hours put toward the completion of my degree, I felt I had a firm foundation but countless questions about what the structure at large was to look like. It was around this time that I began studying range maps, reading Deam’s Flora, exploring ecological associations, and really working to understand the forces and effects of glaciation on our state. I became familiar with the terms ‘glacial relict’ and ‘boreal remnant’, ideas which I considered fascinating.

I noticed that every range map for eastern white pine had a continuous distribution to the north, but also small pockets scattered through the lower Midwest, one of which was consistently placed over Indiana’s west-central counties. Looking at Deam’s Flora I discovered these remarks - “This species is local and is usually found in limited numbers, except along Bear Creek, Fountain County and Big Pine Creek in Warren County where there were formerly many acres of it…on cliffs and high banks along Bear Creek, Fountain County and in a like habitat including adjacent lowland in Warren County along Big Pine and Kickapoo Creeks.” 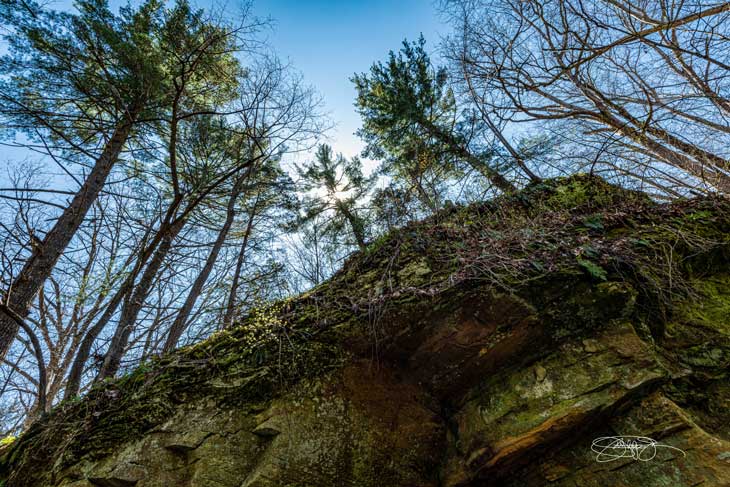 I spent every moment that I could in the woods observing and whenever I would encounter a pine tree, I would think – “is this a relict?”, the question seemed impossible to answer with any amount of surety. Then I encountered two towering giants in the bottom of the sandstone canyon carved out by Bear Creek in Fountain County at Portland Arch Nature Preserve. There were other pines on the property…but these two pillars seemed to be whispering to me secrets of the past. I read that at least some of the white pine on this preserve are ‘boreal relicts’. I felt some satisfaction in this and continued my general exploration of as many natural areas as I could.

As time went by I saw a lot of white pine out there, some were obviously planted or naturalized, and others gave me the same feeling as the two towers of Portland Arch. The pines at Pokagon were tall but too well organized and even aged to be natural. The southern Indiana forests had plenty of tall white pine, but they gave me no special sensation. I discovered that these were planted by the CCC in an attempt to secure the soil after the forests were logged to near complete devastation in the late 19th and early 20th centuries. While walking up Little Pine Creek one day I noticed a couple of pine trees on top of a huge rock bluff, but I couldn’t get close enough to get a really good look. I experienced the same thing while floating Big Pine Creek. These trees were inside the disjunct range, in the right habitat, and they just looked like they belonged. I noticed a 100ft+ individual on the north facing slope of a private ravine along Little Pine that looked distinctly natural, another on the barren siltstone slopes at Black Rock Barrens, and another on Nancy Grenard’s property to the east, a large tree with twisted growth on possibly the driest ridge in the county. In 2014 the Grenard property was added to the Black Rock Barrens. I began to consider the fact that if these trees were the native glacial relict ecotype, they were not far off from blinking out of existence entirely, something that I was not comfortable with happening on my watch. So I set out to make the case for saving the local ecotype from extirpation.

I began to do research at night, looking for anything that I could find. I was searching for historical accounts, something before Deam, who speaks of the local white pine in 1940 as if it were already fading into memories past. A major breakthrough came when I found exactly what I was looking for in an unlikely place, “The Fifth Annual Report of the Geological Survey of Indiana”, made during the year 1873, by E.T. Cox, State Geologist. The following quotes are a sample of the many mentions of glacial relict species contained within the section profiling Warren County – "The bluffs along the Wabash River and the principal creeks are from 80 to 150 feet in height, and are of romantic boldness. The tops of several stations are crowned with pines and cedars, and the sides are generally curtained by living walls of conglomerate or sub-carboniferous sand rock.”

“Southerly along the line of strike, [Big] Pine creek flows in a deep valley, generally walled by bold mural escarpments or overhanging cliffs of massive sandrock, crowned with evergreen pines, cedars and junipers, combining a scenery at once grand, wild and beautiful.”

Further research led me to “Counties of Warren, Benton, Jasper, and Newton Counties, Indiana – Historical and Biographical” by Weston A. Goodspeed, Published 1883

“Warren County has many natural scenes to delight the eye. Several bluffs along the Wabash, towering up like huge domes far above the water, command a view of over twenty miles along the valley and reveal the sinuous curves of the historical old river and the beautiful natural scenery along its banks. One may look down the river from above Independence and see live or sis natural horizons of forestry until the view is terminated by a long belt of heavy timber over twenty miles away. But the most beautiful and picturesque views are along Big and Little Pine Creeks. Perpendicular embankments of sandstone, from which cascades as airy and bewitching as a bride's vail, leap from forty to eighty feet to the rocks below, and rise in mimic clouds of spray like a miniature Niagara, kindle in the beholder the highest emotion of grandeur. Natural groups of white pine, that most commanding of all trees seen at a distance, occur at intervals along the bluffs which skirt the valleys and stand like faithful sentinels over the vale below, through which the brook runs laughing aloud on its way to deeper bays and swifter currents.”

On a visit to the DNR office to look through some of their records, I noted element occurrences marked on the map where I had seen the white pine too far up the bluff for inspection on both Little Pine and Big Pine Creeks. Beyond that, Mike Homoya shared an excerpt from a book by Alton A. Lindsey from 1983 titled “Naturalist on Watch” in which he describes a property in the lower Little Pine Valley that he co-owned with two other Purdue faculty members, which it turns out, just so happens to be the very same property that we today call Kohnkes’ Little Pine Creek Nature Preserve. He describes several features of the property that are recognizable today and he also included something from before his time there – “In 1891, the hardscrabble farmer there had cut down many white pines in the northwest cove. He snaked the logs across the thirty-foot creek, squared them with his broad axe, and built a two-story four-room house on the high terrace.”

This gift of a few lines from Lindsey points out an obvious target for the restoration of a station ‘crowned’ with white pine. This cove is a beautiful sandstone grotto filled with multiple species of fern, wild hydrangea, and drooping trillium. It becomes obvious now that the pines are missing and once they are restored to their rightful place no axe will again strike their boles.

In the fall of 2017 at the height of my interest in white pine, something wonderful happened; a mast year for the pines. All of our trees were heavily loaded with female cones weighty with seed. We took advantage of the situation and were able to harvest some cones from the tops of the trees to begin the experiment of propagation. Through many trials and tribulations I have managed to produce an initial set of trees between 1-2 years of age that we will begin planting into carefully prepared areas in 2020. As we move forward we will be watching for another mast year to replenish our stock of seed and begin the next set of propagation as we plan and prepare for more planting in the years to come.

Over the last 5 years NICHES has made great strides in our efforts to protect local populations of white pine. When I started with the organization we only protected one glacial remnant tree at our Weiler-Leopold Nature Preserve. Today we are actively caring for hundreds of white pine on 4 separate properties in the Big Pine Valley, 3 locations in the Black Rock Barrens, a population along the Big Shawnee Creek in Fountain County and we are working to restore populations where they were decimated by early settlers on the Little Pine, Black Rock Barrens, and at our largest preserve, the 518 acre Shawnee Bottoms in Fountain County. Future work will likely expand to a couple of other tributaries that are mentioned by Deam as home to the white pine in Warren County along Rock Creek and Kickapoo Creek.

The eastern white pine is a component of the vegetation of the Entrenched Valley Section of the Central Till Plain. It has had a home here for thousands of years and despite the voracious axes of early European settlers, it does remain, although diminished. Coniferous trees, even if they are not the dominant trees, can change the system significantly. They are drought tolerant, provide important cover for wildlife, fuel for carrying fire to maintain the natural balance of the system and make important associations with ecto-mycorrhizal fungal partners. Perhaps of equal importance, they provide a food for the soul. They have the power to awaken something deep in our subconscious that somehow reminds us of our wild beginnings, that inspires awe as evidenced by the poetic prose in the selected quotes above, written by men sent to catalogue cold stone and coal seams. White pine has had a home here for over 8,000 years on the banks and bluffs of our stream valleys, it is now in each passing generations hands to ensure they are not lost.

Do you own a property with white pines?

Do you own a property in Warren or Fountain County with white pines that you think could be naturally occurring? Would you like to learn about how to care for the population yourself or possibly look into options for long term protection through NICHES? If so please email Bob Easter at